Short-grain rice is obviously essential for paella.  The other important ingredient, of course, is the stock that rice is cooked in. The Harts go to the trouble of making one specially, using prawn heads, fennel, tomato and brandy, but I feel the complexities of flavour are lost in the finished dish. Instead I take Herráiz’s suggestion of dressing up good-quality fish stock by simmering the heads and tails of shellfish in it for 25 minutes, which gives it a greater depth of flavour without much more trouble to the cook. Chicken, as used by Colman Andrews in his Valencian paella with shellfish, imparts a pleasingly savoury note but jars with the marine flavours in this particular dish.

The sofrito – that aromatic mixture of gently sautéed onions, garlic and tomatoes – is a lynchpin of Spanish cookery, and of most paellas, with the exception of the Harts’, which adds tomato to the stock rather than the dish itself. Herráiz makes a very tasty slow-cooked version, simmered for an hour and then passed through a fine sieve, but José Pizzaro’s simpler take on the sofrito gives his paella a more robust flavour and texture. He makes it in the pan itself, gently sautéing onion and garlic with olive oil, tomatoes and wine, and then allowing it to reduce before adding the other ingredients – it’s quick and gives the finished dish a richness only Herráiz’s can rival but in less than half the time. (Both chefs use copious amounts of olive oil, which also helps on this front.) Although I try using fresh tomatoes, the tinned sort give a more reliable flavour here and are much less fiddly to prepare. 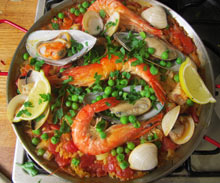 Pizarro also uses monkfish in his paella, which goes down well with the testing panel – it’s firmer than Sri Owen’s cod, so it doesn’t break down during cooking, and it makes a nice textural contrast to the smoothness of the squid. The peas he uses add a sweetness to the dish, but as broad beans are still in season here I’ve substituted them in homage to the fresh white lima beans that make an appearance in the traditional paella valenciana.

Paella is sometimes served with aioli but, although I can never resist a spoonful if there’s some around, its rich, garlicky flavour does overpower the delicacy of the rice. To make the most of it, allow the dish to rest before serving. As Colman Andews points out, “most aficionados of paella prefer it tepid rather than hot”, and with good reason: it tastes much better.

I’m not sure there’s any truth in the idea that paella should only be eaten with a wooden spoon but I’m sure that it really, if possible, should be scoffed straight from the pan. This is a festive dish that celebrates the joy of communal dining rather than a formal knife and fork affair – so make it for Sunday lunch, stick the pan straight on to the garden table and get stuck in. 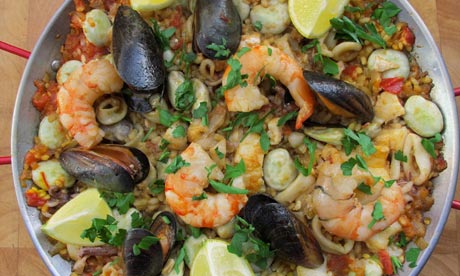 Serves 2-4, depending on hunger

Sautéing prawns to pimp the stock

1. Shell the prawns and put the flesh aside. Heat 1 tsbp olive oil in a large pan and gently sauté one clove of chopped garlic for two minutes. Add the prawn heads and tails and sauté, stirring to break them up, for three minutes. Pour in the stock and simmer gently for 30 minutes, then strain, season to taste and keep warm.

2. Heat the remaining oil in a 26cm paella or other wide, thin-based pan and add the monkfish. Sauté for five minutes until slightly browned, then remove and set aside. Add the onion and garlic and cook until softened, then stir in the paprika and cook for one minute. Tip in the tomatoes and wine, turn up the heat and simmer for 10 minutes. Add the squid and beans.

3. Stir in the rice to coat well so it forms an even layer, then add 400ml stock and the saffron and soaking water. Simmer vigorously for 10 minutes then arrange the monkfish, mussels and prawns on the top of the dish, pushing them well into the rice but not otherwise disturbing it. Cook for about eight minutes – if the dish looks very dry before the rice has cooked completely then add the rest of the stock, bearing in mind it shouldn’t be at all soupy.

4. Cover the dish with foil and take off the heat. Allow to rest for 10 minutes then garnish with flat-leaf parsley and wedges of lemon.

Is paella Spain’s proudest culinary achievement, and can a seafood version ever hope to compete with a proper paella valenciana? What do you like to put in yours – and has anyone been brave enough to try one of Alberto Herráiz’s dessert paellas?

Tea History, Tea for Health and Tea for Pleasure